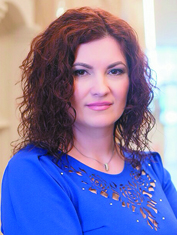 BLISS is a well-known multi-practice law firm in Ukraine offering a wide range of services to its clients. We provide legal advice and representation in the areas of:

Since its establishment in 2008, BLISS has been repeatedly chosen as a legal advisor by many leading companies in the region. Our credibility among clients has been earned by an individual approach, including a comprehensive study of problems and working out unconventional solutions.

BLISS is leaded by Marina German, an attorney with broad practical experience, a member of the Ukrainian Advocates’ Association and the Ukrainian Bar Association. All the firm’s members are  continually improving their professional skills by attending seminars, conferences and courses.

Our mission is to help clients build a strong successful business and reach their goals in the most comfortable and easy way.

BLISS law firm has recently advised some major companies in Ukraine on multi-million disputes regarding debt collection, accrual of additional tax, cancellation of registration as a taxpayer and appealing against other decisions of the revenue services.

Besides, BLISS has brought complete legal support to clients in their deals on wholesale trade, various services and works and in cases regarding land rent, invalidation of contracts, corporate matters, etc.

We are pleading some private cases on divorce, termination of contracts, invalidation of PoA, recognition of ownership, etc. At the same time, BLISS is now working on the registration of over 50 trademarks on applications made by both private and legal entities. BLISS law firm is situated in the heart of Dnepropetrovsk. Nevertheless, we provide legal assistance for business all over Ukraine regardless of a particular company’s location.

Despite the previous moratorium on inspections in Ukraine and a still valid moratorium on tax inspections, many business entities interact with state-controlling bodies anyway. As a result, they have to defend their legal rights and interests by appealing against the unlawful decisions of such bodies via both administrative and judicial procedures.

BLISS law firm carried out a practical examination and found that, unfortunately, the activities of Ukrainian controlling bodies are not always based on current legislation and approved rules and procedures. Accordingly, when trying to take a decision not in favor of business entities, controlling bodies support themselves through artificially discovered grounds and do not take the trouble to refer to legislative provisions.

Therefore, in 2015 the firm’s lawyers dealt with numerous administrative disputes, appealed against decisions of the Tax Inspectorate, Customs Service, the Financial Inspection, the Executive Service, Architectural and Building Inspection and the State Emergency Service.

Analyzing some specific categories of disputes with state bodies, attention  should be paid to the bases of decisions to which such bodies refer to, especially, over the last year.

As practice shows, in the field of inspection of tax and duty payments and usage of budget funds, the controlling bodies frequently insist on the unreality of economic transactions, which  leads to the unlawful formation of a tax credit by a taxpayer, improper use of budget funds, etc.

In this case, the revenue bodies usually insist that the economic agent fails to provide sufficient documents. In this regard, you should note that the mentioned documents are usually not compulsory to be provided or, furthermore, this body had not requested them at all earlier.

For example, when fulfilling a sale contract, the parties completed all the necessary documents: invoices, tax invoices, acts of acceptance of goods, bills. At the same time, the tax inspection insists that the agent does not provide it with “other” documents (quality certificates, technical passports). In that case, you should note that in order to prove the reality of economic activity of sale, the above-mentioned primary documents are enough. The participants of economic relationships of such kind are not obliged by law to complete any other documents. By the way, in practice no other documents are completed either.

Besides that, confirmation of the quality of goods, ascertainment of its conformity or non-conformity to standards and technical conditions has no impact on the lawfulness of determination of a the taxpayer’s liabilities and cannot be evidence to declare a transaction invalid.

As to execution of service contracts and contracts of work, things are different. Certainly, some more types of documents can be given, including plans and activity reports. However, in this case the character and complexity of economic activity should be taken into consideration while determining the necessity of such additional documents.

For example, in one case the tax inspection stated that a plan and reports should be executed while fulfilling the agreement on placement of advertisements on the billboards. And in another case — while fulfilling the agreement on packaging of goods for transportation. However, in both these cases, it is quite logical to insist on the simple nature of such operations and to prove that they do not require partial execution or advanced planning, so that the writing of a plan or report is inappropriate.

Another quasi argument to which the revenue services, including inspectors of the financial inspection, refer to while determining the so-called unreality of a transaction is unreality of transaction on a chain of counterparties. In this regard, an exhaustive explanation was given by the High Administrative court of Ukraine in the Letter of 2 June 2011 No.742/11/13-11.

Thus, “invalidation (including insignificance) of legal actions, concluded on the chain of previous intermediary agents through the chain of which the movement of goods and services, supposed to be acquired by the last taxpayer in this chain, was declared is not an obligatory factor to determine the money liability by the controlling body. At the same time, relations between participants of the previous chain of goods and services have no direct impact on analysis of the reality of economic transaction, executed between the last taxpayer in the chain of delivery and his direct counterparty”.

The controlling bodies frequently come to the conclusion about the unreality of an operation, based on the absence of bill of lading. But in response to this argument we can always mention item 2 of the List of documents needed for cargo transportation by vehicle transport in inland traffic, according to which “the presence of a bill of lading is not obligatory for the driver of an entity or a private entrepreneur who executes such cargo transportation for his own needs, and the presence of an invoice or another document confirming the ownership of cargo is enough”.

Besides, the Ministry of Infrastructure of Ukraine holds the same opinion, as stated in the Letter of 28 May 2014 No. 5615/25/10-14regarding filling in a bill of lading when carrying out cargo transportation by vehicle transport.

To confirm the fact of good transportation by one’s own transport, it would be reasonable to provide documents confirming the ownership of a business entity or its employees (drivers, managers, etc.) of transport by which such kind of goods can be practically transported (taking into account its size, weight, special requirements to explosive, chemical agents, food products, etc.).

In addition, controlling bodies frequently ignore the explanations of business entities, even provided in writing. When appealing against a decision, emphasis should be put on such facts as well as on inconsistency in the arguments of the controlling body.

Moreover, it is also important to pay attention to the amount of any penalty by the tax inspection — 25% or 50% of the sum of a tax debt — because a bigger penalty could only be applied if during last 1,096 days the penalty sanctions were applied to this taxpayer. Usually, the tax inspection cannot prove issuing a tax decision earlier or simply refer to a decision that has already been cancelled.

Another group of widespread administrative disputes are disputes with the Customs Service. Taking into account the wide corruption experience of customs authorities in Ukraine and its practical impunity, the liberty of their actions in making unlawful decisions is understandable.

For example, when in the process of customs clearance of goods many economic agents face the amendment of its customs value on the basis of decision of the customs authority. But mostly such decisions can be declared illegal by judicial procedure and, as a result, cancelled.

It is well-known that according to the general rule set by the Customs Code of Ukraine, the customs value of goods should be determined according to the first method — the agreement price (contract price), that is, the price, fixed by an economic agent at their discretion.

When applying the second method of determining the customs value of goods — based on the agreement price on similar goods — the customs authority could refer to previous delivery of such kinds of goods made both by this economic agent or other agents earlier.

However, in this case you can always mention the position of the High Administrative Court of Ukraine in this respect, stated in the decision of 20 January 2015 in Case No.K/800/22586/14: “Formally, a lower level of customs value of goods, imported by the plaintiff in relation to customs value of another clearance could not be treated as under-estimation of customs value by the plaintiff, and is not an obstacle to apply the first method of determining the customs value, and could not be sufficient basis to deny the customs clearance of goods, based on the first method of determining its customs value”.

Similarly, much non-compliance with legislation and simple logical assumptions could be found in decisions of other controlling bodies. Frequently, they make such decisions lacking the appropriate evidence base. For example, in one case the architectural and building inspection insisted on breach of state-building norms, based merely on the opinion of its inspector, not attaching any certificates or conclusions of experts to the decision. In another case, the State Emergency Service unreasonably insisted on conducting an inspection, claiming breach of fire safety without furnishing any proof. And there are numerous cases like this that can be mentioned.

Certainly, each dispute with a state body is individual and requires careful examination of all the circumstances in the case. Nevertheless, there is general logic, basic principles to follow when appealing against any unlawful decisions and which can be learnt on the basis of practical experience and repeated participation in administrative disputes protecting the interests of business entities.