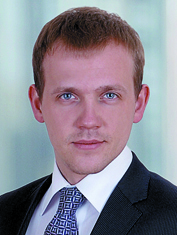 DLA Piper is a global law firm with a presence in more than 30 countries throughout the Americas, Asia Pacific, Europe and the Middle East, and provides a broad range of legal services to local, regional and international clients.

Areas of practice in Ukraine

The firm’s Kiev office specializes in the following fields:

— Corporate and M&A: set up and termination of businesses, corporate governance, M&A, including due diligence, corporate restructuring and reorganization; corporate investigations and compliance and legal support of day-to-day operations.

— Competition law and regulatory: permits for concentrations; for concerted practices, leniency program advice; advice on protection from unfair competition, compliance advice and audits, obtaining of preliminary conclusions from the AMCU; abuse of dominant position; advice on commercial agreements and trade practices, natural monopolies and public procurement; support during investigations by the AMCU, as well as competition litigation.

M&A transactions, and in particular complex cross-border transactions, can be implemented in various forms. These can be acquisitions, establishment of joint ventures, mergers and demergers, etc. While the majority of transactions are rather typical, some could be absolutely non-standard and extravagant. In fact, the parties have freedom to do whatever they wish, provided this complies with laws, including various merger control requirements, of the countries involved and affected.

When planning exactly what and how would be implemented, the parties should keep in mind that sometimes not only do they have to analyze the direct legislative provisions measuring implementation of transactions. They should also assess the indirect considerations. In this article we would like to discuss exactly these indirect and not necessarily evident from first glance considerations.

Transactions are subject to merger control in various countries, including Ukraine. Multiple reviews of international M&A are likely. And while the same transaction could be cleared in one country, it may be prohibited in another. For example, the merger between two major US airspace manufacturers, Boeing and McDonnell Douglas, was approved in the US but was nearly blocked by the European Commission (the EC) which saw significant competitive threats to Airbus.

Sometimes the transaction in a particular country is only cleared subject to certain conditions. Moreover, the parties should decide whether they wish to proceed with a transaction if they are to commit on those conditions.

Ukrainian and multinational companies have been advocating changes to Ukrainian merger control for years. The reason was that due to the very low notification thresholds too many transactions that were highly unlikely to have any adverse effect on competition in Ukraine were subject to mandatory pre-completion merger clearance due to the form-over-substance approach. Therefore, the merger control reform, recently adopted and effective since 18 May 2016, stipulating, inter alia, significant increase of financial thresholds and some other changes, was greatly welcomed by business.

As a result of merger reform a significant number of both domestic and cross-border transactions would fall beyond the scope of Ukrainian merger control. This means that the caseload of the Antimonopoly Committee of Ukraine (the AMCU) would drop substantially. Accordingly, the AMCU which will now deal with dozen of applications instead of one thousand of them, the AMCU would be able to allocate additional resources to conduct a more thorough assessment.

The long-awaited changes to the notification thresholds are coupled with development of the concept of antitrust remedies. Whilst reviewing a merger the AMCU must initially determine whether the merger is likely to result in monopolization or substantially limit competition. If that is the case, the AMCU may prohibit the merger or approve it subject to conditions. Such conditions, referred to as remedies, are aimed at mitigating the negative effect of the merger and ensure that a transaction would not limit competition on the market. Merger control reform also provides that the remedies undertaken by parties must be proportional to risks. According to the new procedure, the AMCU and the parties may hold consultations in order to agree on the necessary remedies.

Despite Ukrainian law containing provisions on remedies for many years, they were rarely applied in practice. However, recent changes and circumstances described above could change this and business should be ready.

Remedies: What is This?

To give an example of structural remedies: one retail chain acquires another, the competition authority requested that the purchaser is prohibited from purchasing other retails shops in the particular region over the next 5 years. So structural remedies are generally one-off measures that are designed to increase competition by changing the structure of the market. They usually involve either a ban on acquiring additional companies or assets or divestiture of certain assets to a third party.

Behavioral remedies are generally ongoing measures that are designed to regulate or constrain the behavior of parties in a market. For example, in the above acquisition of a retail chain, a request was made to maintain retail prices in a certain region at a level not higher than average in the country for 3 years. Behavioral remedies usually require ongoing monitoring by the authorities. They may include a restriction on entities to enter intolong term contracts, a commitment to invest in additional capacities, commitments that cap the mark-ups, etc.

It should be said that there are a number of other types of remedies. For example, access commitments. These can be remedies to give access to a critical technology or infrastructure.

To give you an understanding of how remedies are applied in the EU, between 2004 and 2012 the EC cleared 147 mergers subject to commitments. In UTC/Goodrich, the business of Goodrich in aircraft electrical power generation and distribution was divested. The package included offering a competing engine supplier, Rolls-Royce, an option to acquire one of Goodrich’s R&D projects, which was a type of structural remedy. Besides, in recent years the EC has cleared several airline mergers on the basis of slot release remedies, which is a type of access remedy.

In 2014 the AMCU approved two transactions in Ukraine subject to conditions. The AMCU considered the merger case of two companies registered outside of Ukraine which sell detergents and softeners for fabrics (conditioners) on the Ukrainian market. It was determined that the parties have a significant share on the market of softeners for fabrics (conditioners), therefore the merger was approved subject to remedies.

Another transaction which was approved by the AMCU subject to conditions was acquisition of joint control over Goodman Fielder Limited by First Pacific Company Limited and Wilmar International Limited. The AMCU identified that First Pacific and Wilmar Group have a considerable share of the refined palm oil (stearin) market and that the transaction may have a certain negative effect on competition in Ukraine. The AMCU determined that the negative effect could be avoided subject to the parties committing themselves not to implement any concerted actions on the refined palm oil (stearin) market. The parties voluntarily agreed to undertake the relevant commitments.

We assume that as a result of merger control reform, more cases of remedies application would appear in Ukraine. Analyzing the experience in other countries where remedies have already been applied for some time now, parties planning transactions in Ukraine should take into account that they could face such remedies in future and, therefore, assess the effect of their actions more profoundly.