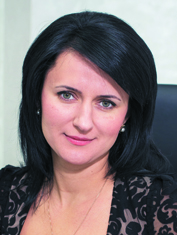 Partner, AVER LEX Attorneys at law. Attorney, board member of Ukrainian Tax Advisors Association, Coordinator of the Section of attorneys and lawyers of the Ukrainian Bar Association. Vitaliy is one of a small number of highly-qualified experts in criminal defense in the sphere of commercial and corporate activity, in the field of protection of the subjects of entrepreneurial activity and anti-raiding protection of business

In 2012 tow famous Ukrainian lawyers, Olga Prosyanyuk and Vitaliy Serdyuk, created a powerful team of professionals with a great deal of experience, broad range of knowledge, a constant desire to develop and a high level of responsibility and dedication. Today, the friendly AVER LEX team consists of 5 Partners and 25 specialists in the sphere of Criminal Law, Taxation and Litigation.

Nowadays our specialists defend the interests of foreign and Ukrainian clients in many big resonant cases. Taking into account the common practice of law-enforcement bodies applying illegal methods of collecting proof and falsification of criminal proceedings, we are realizing more and more the importance of comprehensive participation in defense at strategic and tactical levels; which individual lawyers will find impossible to cope with. That is why from the very beginning of our activity, we decided to be the best in one thing rather than to be simply good in everything.

The above is proven by both international and Ukrainian ratings. Besides, according to Legal Awards 2015 AVER LEX Attorneys at Law won the nomination “Law firm of the year in business defense” and was recognized as the best in Criminal Law by the international research publication Legal 500 EMEA 2015.

All lawyers put the onus in their work of perfection of criminal practice, developing effective and active strategies of defense from illegal revisions by controlling and law-enforcement bodies in accordance with the specificity of a business,  from their negative consequences, seizures by raiders, pressure from the law-enforcement bodies via stress searches, arrests or persecution, etc.

Our clients can always count on unique strategic solutions, a real result, confidentiality and an individual approach to every person. That is why leading national companies, internal and foreign individual investors and well-known business and political figures trust the lawyers of our company. The reason is that we know the secret of long-lasting partnership relations!

There is nothing impossible for us and we always know what we want! This is the motivation that moves us forward!

All changes to current Ukrainian legislation made in recent years are usually presented as approximation to European standards and measures for eradicating corruption, which make up an integral part of the European integration process. We are forced to admit that several amendments to criminal procedural legislation could potentially be used as an instrument for prosecuting «unwanted» persons, as well as putting pressure on business. In such circumstances, the work of the attorney actually turns into a fight with law-enforcement and the judiciary for the client’s freedom and business.

Amendments Related to Seizure of Property

One of the most controversial and, therefore, widely discussed issues, relates to the expansion of legal grounds for restricting the property rights of a person in the form of seizure in criminal proceedings.

The first point, which cause concern among experts who practice in the field of criminal law, is the definition of the concept of the seizure of the property itself, providing:

— First, the possibility to restrict not only the person’s right to alienate such property, but also the right to use and (or) dispose of such property;

— Second, the wide and vague formulation that the property can be seized if «there are sufficient grounds to believe» that such property was used for committing an offense or obtained through the commission of such an offence. Thus it remains an open question as how the restriction of a person’s right to use the property (for example, on the rental conditions) contributes to the tasks of the criminal proceeding.

In addition, a number of questions are also being raised by the provisions in which legislators prescribed the possibility of seizure of debit transactions, which in fact cannot be regarded as property, and thus — to be the subject of the arrest.

Another novelty we should pay attention to relates to the updating of the Institute of Special Confiscation (Part 4 of Article 962 of the Criminal Code of Ukraine), which provide the possibility to withdraw property from a third party if:

— the property was purchased from the suspect (accused, convicted) for free or in exchange for an amount of money that is significantly lower than the market price;

— such person knew or should have known that the aim of the suspect (accused, convicted) was to avoid confiscation (special confiscation).

On the one hand, legislators took measures to protect the rights of a bona fide purchaser, noting that special confiscation cannot be applied to the property of such a purchaser.

On the other hand, it was missed that the person should be considered as a bona fide purchaser if he (she) purchased the property on the basis of a paid contract and did not (could not) know that the seller had no right to alienate such property (Part 1 Article 388 of the Civil Code of Ukraine) with no relation to the question if the price determined in such contract corresponds to market prices.

In general, the implementation of market prices relates to issues of taxation and cannot be used as grounds for violating the property rights of the person without confirmation that such person was “engaged” in any illegal schemes.  In fact, the burden of proof was shifted to the third party, who will be forced to prove that he (she) was not involved in any illegal schemes in order to preserve his (her) property.

At the same time, no specification of how the deviation from the level of the market prices should be determined (“significantly”  lower than the market) gives almost unlimited possibilities for abuse, even if such a third person will confirm, in the prescribed manner, his (her) ignorance of the seller’s motives.

Such risks are especially relevant for so-called public criminal proceeding of a political nature. As practice shows, in these types of cases the aspiration of law-enforcement and the judiciary to satisfy the public’s request for any «results» of the investigation and punishment for the alleged perpetrators prevails over the principles of legality and the rule of law. In such circumstances, any «third party» that could even occasionally be involved in the relationship related to the property’s alienation may actually lose his (her) property as a result of being recognized as a participant of a “criminal scheme to conceal property from special confiscation”.

In order to minimize the risk of abuse on the part of the law-enforcement authorities and courts, legislators prescribed an obligatory condition in the form of a preliminary announcement of such a person in an international and (or) interstate wanted list. Such condition was aimed at “disciplining” the investigating authorities and serving as a “deterrent” mechanism that, on the one hand, does not allow the application of this procedure on a mass scale and, on the other, to use the criminal proceedings for prosecuting “unwanted” persons. In practice, the absence of the person on the international and (or) interstate wanted list, confirmed with sufficient evidence does not prevent the investigating judge from sustaining the motion of the investigator (prosecutor) and giving permission to implement the procedure of special pre-trial investigation, in direct violation of the criminal procedural law.

Moreover, there were several attempts to amend current criminal procedural legislation by submitting drafts of the Law of Ukraine, which prescribe elimination of the requirement that the issue of implementation of  procedure of special pre-trial investigation can be considered only if the person was declared to be on an international (interstate) wanted list. In our opinion, such tendency is very dangerous. In fact, if such amendments were to be adopted, this could lead to a situation where the procedure of the special pre-trial investigation and trial would become a convenient mechanism for resolving business conflicts and give the “green light” for arbitrariness on the part of investigative bodies.

In practice, the investigative judge quite often examines the motions of the investigator (prosecutor) formally without providing sufficient, proper analysis of the sufficiency of such motions. Given that, in this case, in order to start the procedure of special pre-trial investigation it would suffice only to qualify the person’s action in the written notice of suspicion in accordance with the list of “special” articles (Part 2 Article 2971 of the Criminal Procedural Code).

Generally, the publicity of state authorities is an important part of a law-based state. Unfortunately, we have to admit that the wide publicity of the highest law-enforcement bodies of Ukraine does not confirm the effectiveness of their work and the achieved results in the fight against crime, but such publicity, in fact, substitutes the real performance of the obligations prescribed by legislation.

Conducting real investigation of the announced circumstances starts after the investigation bodies position has been publicly disclosed.

This, in turn, indicates that the announced charges had no legal (evidence-based) basis and were not supported by actual evidence collected in the course of the pre-trial investigation.

Moreover, as recent practice shows, the investigative materials are formed selectively (in fact the investigating authorities take into account only that evidence which matches the announced official position).

In such circumstances the lawyer acting in the interests of the person who was publicly charged is forced not only to conduct a parallel independent “investigation” to form the evidence of the defense, but to also provide legal assistance in a trial related to protecting the honor, dignity and (or) business reputation of a client.

At the same time, the attorney should take into consideration the preliminary public opinion on the client’s guilt, formed by the actions of law-enforcement officials. In such circumstances, the lawyer is forced to resort to public options: to publish information about any illegal actions of the investigator, file a statement on the committing of a criminal offence under Part. 2 Article 387 of the Criminal Code of Ukraine in a form of disclosure of humiliating information of pre-trial investigation data, attract independent media, file complaints to international bodies, institutions (including, European Court of Human Rights).