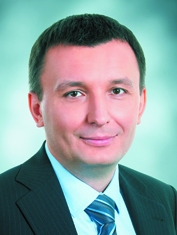 Dentons is the world’s first polycentric global law firm. A top 20 firm on the Acritas 2015 Global Elite Brand Index, the firm is committed to challenging the status quo in delivering consistent and uncompromising quality and value in new and inventive ways. Driven to provide clients a competitive edge, and connected to the communities where its clients want to do business, Dentons knows that understanding local cultures is crucial to successfully completing a deal, resolving a dispute or solving a business challenge. Now the world’s largest law firm, Dentons’ global team builds agile, tailored solutions to meet the local, national and global needs of private and public clients of any size in more than 125 locations serving 50-plus countries. www.dentons.com.

Dentons’ long-term commitment to Ukraine is unsurpassed among international law firms. We have been active in Ukraine since 1988, and the firm officially opened the Kiev office in 1992.

Dentons’ Ukrainian practice encompasses the full range of legal services across a diverse range of industries. With our strong global capabilities, we are well-equipped to assist you with an extensive variety of cross-border issues. Our international experience and in-depth knowledge of Ukrainian legislation, as well as our client-tailored approach, enable us to provide you with innovative, seamless legal solutions of the highest quality.

In October 2014 Ukraine received its new anti-corruption law, the On Corruption Prevention Act of Ukraine (the Act), which appeared to be stricter in certain aspects if we compare it with the law it replaced.

In particular, the Act contains a separate chapter specifically stipulating a number of requirements with which businesses should comply. In response to such statutory requirements, some private companies decided to introduce new compliance procedures, or to update their existing procedures. Such actions were taken in anticipation that 2015 would become the year when Ukraine would finally see some real enforcement of anti-corruption law. However, 2015 instead became the year of protracted establishment of new anti-corruption agencies.

The joint efforts of civil activists, foreign partners, some conscientious officials and the professional community have finally resulted in the more or less transparent establishment of the National Anti-Corruption Bureau (the Bureau) and election of the anti-corruption prosecutor.

Meanwhile, the establishment of the National Corruption Prevention Agency (the Agency), which, among other activities, will develop and implement anti-corruption policy, maintains a corruption offenders register and screen the income declarations of public officials, is still a long way from being completed. Apart from overseeing the public sector, the Agency is vested with quite wide powers to monitor compliance with anti-corruption law by private companies. Taking into account that some requirements for businesses are rather explicit, it is worth considering the reassessment of existing processes, regardless of whether or not the company has an extensive compliance policy. Below we give an overview of such key requirements and  suggest some recommendations to be employed in order to comply with the law.

While the chapter of the Act establishing requirements for the private sector focuses mainly on the companies participating in public procurement, there is still a set of rules to be followed by any business, even if it is not involved in state tenders.

(i) Necessary and Reasonable Measures

The Act states that any private company should develop and apply in practice certain measures, which are necessary and reasonable to prevent corruption in the company’s activities. As the Act is not clearly specific, it leaves businesses to wonder what exactly should be done.

While some explanations and clarifications may appear once the Agency becomes operational, at the moment it is difficult to speculate how strictly the Agency will enforce compliance with this requirement. Would the introduction of anti-corruption clauses into agreements with employees and vendors be enough? Or perhaps companies should put more effort into it and perform regular training so all concerned are kept on the right track? Obviously, there is no one-size-fits-all approach, but here are some factors that may be taken into consideration.

For example, in case the company deals with regulatory submissions, the first thing to think about is the gifts policy. Some officials of the regulatory authorities are accustomed to courtesy gifts and may unfavorably treat those who do not support this practice. However, an updated law says that in case the person gives a gift to an official, who subsequently adopts the formal decision in favor of such person, such decision is deemed conflictual and should be invalidated. It is not clear whether this limitation would cover decisions taken in favor of a company employing the gift giver, but considering that there is a probability that it would, businesses should ensure no gifts are given to such officials.

The employment or contracting of former officials is another risk practice that needs to be rethought. The law has clear limitations, which may be put simply as the 1+1 rule: if the official controlled, oversaw or engaged in decision-making process towards the future employer within one year of his or her termination from the state body, then at least one year should pass before such person may be legitimately employed or contracted. The approach to handle this risk is quite intuitive — the company should establish a clear process to carry out background checks to ensure the above rule is strictly followed.

These are just a few examples, but the pattern is obvious — business processes should be critically reassessed to reveal potential risk zones and take adequate measures to tackle the risk of non-compliance with the above requirement.

The law provides for the obligation of the director and shareholders to perform regular assessment of the corruption risks in the company’s activities and to apply adequate measures. Again, the Act does not shed light on the frequency of such assessments. In our view, once a year seems a reasonable approach until enforcement practice and/or formal clarification proves otherwise.

(iii) Anti-bribery, Conflict of Interests and Reporting Obligations for Employees

The Act establishes several direct obligations for the officers and other employees of companies, in particular they have to:

— Refrain from committing or engaging in corruption offences related to the company’s activities;

— Refrain from activity which may be considered as readiness to commit a corruption offence;

— Report immediately any incitement to commit a corruption offence, commitment of corruption offence by another employee, or when a real or potential conflict of interests occurs, to the director, shareholder(s) or corporate compliance officer.

As we can see, while a person is allowed some discretion when choosing to whom he/she should report, the reporting should be made immediately. Importantly, an employee should report not only the conflict of interests that actually occurred but potential conflicts as well.

Interestingly, the Act does not require companies to implement the above obligations for employees at corporate level. However, such implementation, for example in labor contracts, seems like a reasonable approach, especially for companies that have not yet established profound compliance procedures, but which are willing to comply with the requirement explained in subsection (i) above.

In our view, the above three requirements constitute the minimum threshold to mark compliance by the company with the respective chapter of the Act. However, if the company is engaged in public procurement with the value of the contract exceeding UAH 20 million, the minimum turns into a slightly longer list, which requires much greater effort to ensure compliance with it.

In addition to the above requirements, which apply to any private entity, tender participants should satisfy the following obligations.

The company should have a compliance program, which has to be discussed with the company’s employees prior to its approval. While the Act establishes a recommended list of measures to be reflected in the program, the businesses have full discretion when it comes to the program’s content. Well, almost full discretion, as the Act requires that the program contains the procedure for appointing the person responsible for the program’s implementation (the Compliance Officer).

It should be noted that the Act introduces a flexible approach to the naming of the compliance program by defining it as a set of rules, standards and procedures for corruption prevention and counteraction. Thus, there is no need to rename the existing document to meet the title stipulated in the Act — companies are free to use any title and to regulate compliance procedures through several documents.

The compliance program must be made available to employees on a continual basis. As the Act does not direct the methods by which the program can be made available, as a practical example, a hard copy of it can be placed on the wall in the office, or the soft copy can be uploaded onto the intranet.

Importantly, labor contracts and internal labor rules should contain provisions obliging an employee to adhere to the compliance program.

The company participating in the public procurement should also appoint a Compliance Officer. The Act does not establish specific requirements to the title of the position. What really matters is the function assigned to the employee — implementation of the compliance program.

As mentioned above, the Compliance Officer should be appointed according to the procedure foreseen in the compliance program. The appointment can be made by a corporate order issued by the director or — if the increased independence is a goal — through the decision of shareholders.

In addition, termination of the Compliance Officer for any reason, including by mutual consent, should be reported to the Agency within two working days and followed by immediate submission of the new candidate. In our view, hiring a Compliance Officer may take weeks if not months, and for this obvious reason it seems doubtful that the Agency would strictly watch the immediate submission of the new candidate.

Businesses would have to comply with the above key requirements of the Act, but it is still to be seen whether the Agency will enforce them in a proactive manner. As discussed above, the Agency has quite wide powers ranging from requesting information in order to verify compliance with the law, to imposing fines on companies failing to take the necessary measures. And while the amounts of fines are rather modest, we believe that no company, especially a listed one, would like to wear the label of “fined for corruption”. This should be one of the drivers for companies to make timely adjustments in line with the Act.