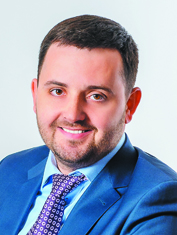 Counsel, Sayenko Kharenko. Mr. Zablotskyi is a highly qualified trade lawyer with outstanding expertise in advising companies, industries and authorities on trade remedies (anti-dumping, countervailing and safeguards proceedings), application of WTO regulations, export-import regulations and the economic and commercial impacts of international trade on the growth of business and industry. Mr. Zablotskyi was recognized in trade and customs for Ukraine by Who’s Who Legal: Trade and Customs 2015.

Counsel, Sayenko Kharenko. Ms. Makhinova comes highly-experienced in trade remedy proceedings (anti-dumping, countervailing and safeguards) both in Ukraine and abroad. She also specializes in all aspects of international trade, including cross-border trade transactions and drafting different types of contracts, WTO regulations, advice on different regulatory issues. Ms. Makhinova is a country expert on franchising for the International Distribution Institute.

Sayenko Kharenko is Ukraine’s leading law firm, with an internationally oriented full-service practice and a Ukrainian law representative office situated in London. In 2015, Sayenko Kharenko collected three national Law Firm of the Year awards, having been recognized Ukraine’s best team by IFLR European Awards, Who’s Who Legal Awards, and Chambers Europe Awards for Excellence. Sayenko Kharenko was also recognized one of the two best law firms in Ukraine in 2015 according to Top 50 Largest Deals Table published by Yuridicheskaya Practika Publishing. The firm is highly recommended in Ukraine by all major international guides, including Chambers Global, Chambers Europe, IFLR1000, and The Legal 500.

About its International Trade Group

Sayenko Kharenko International Trade Practice Group offers a wealth of experience across the full spectrum of cross-border trade regulation and policy to help clients manage risks and maximize opportunities associated with the increasing level of regulation of international trade in goods and services around the world.

Sayenko Kharenko is one of the few national law firms with a stellar team of lawyers possessing experienced of a myriad of complex of rules of the World Trade Organization law (WTO). The firm′s team continually advises foreign and domestic companies, manufacturers, exporters, and importers on the enforcement of  WTO rules. Sayenko Kharenko’s lawyers advise both Ukrainian and foreign companies on bilateral and regional agreements — free trade and customs union agreements.

Sayenko Kharenko trade lawyers have a strong reputation among colleagues and the professional community, and come recommended by leading legal directories for Trade, Customs and Franchising in Ukraine. They also serve as Ukraine’s national experts on agency, distribution and franchising of the International Distribution Institute.

It goes without saying that 2015 was a flagship year for Ukraine in the field of trade defense remedies. In addition to numerous proceedings initiated and measures applied, Ukrainian investigative authorities faced lots of challenges, to name but a few: the first lost a WTO case Ukraine — Definitive Safeguard Measures on Certain Passenger Cars (DS468);the first decision of the Supreme Court of Ukraine shedding light on the competence of the Interdepartmental Commission on International Trade (i.e. the state agency responsible for adopting key decisions in trade defense proceedings) (the Commission) and of the courts proceedings; the new WTO case initiated by Russia to challenge the Commission’s cost adjustment approach1; for the first time Ukraine applied countervailing duties. In this article our aim is to highlight major trends of trade defence proceedings in Ukraine.

At the same time, 2015 was quite rich for new trade defense proceedings. In June and November the Commission initiated two anti-dumping investigations against products imported and originating from Russia, namely: certain nitrogen fertilizers and abrasives. Notwithstanding the very negative conclusions made by the Panel in the WTO case DS468 in respect of the Commission’s approaches employed in a safeguard investigation regarding passenger cars, in July the Commission initiated the safeguard investigation related to imports into Ukraine of blocks and sheets from polypropylene foam irrespective of country of origin and export.

Additionally, in 2015 the Commission initiated a number of reviews of both safeguard and anti-dumping measures. In February the Commission reviewed the safeguard measures applied to the import of passenger cars into Ukraine. Following the results of the review the passenger cars with hybrid diesel-electric propulsion system were excluded from the scope of application of safeguard measures. In March and September the Commission initiated a sunset review and interim review of anti-dumping measures applied to the following products originating in Russia: fibreboards and asbestos cement shingle, respectively.

Cost Adjustment: to Be or Not to Be

Ukrainian producers have not only learned how to persistently stress their points in the course of trade defence proceedings, but also have demonstrated their strong interest to assert their rights in courts if the relevant decisions of the Commission are challenged in a court.

The Ukrainian producers of ammonium nitrate has broken new grounds in respect of anti-dumping duties applied by the Commission following the results of interim and sunset reviews of anti-dumping measures imposed on imports into Ukraine of ammonium nitrate originating in Russia. A reminder that in 2014 Ukrainian producers applied the EU experience in cost adjustment in the course of the said reviews. As a result, the Commission considerably increased the relevant anti-dumping duties imposed following the results of the basic investigation. Thereafter, the Ukrainian producers managed to assert the said duties in all court instances — starting from the first instance to the Supreme Court of Ukraine. The relevant judgments contain several crucial conclusions that may have precedential value for Ukraine. Particularly, the courts ruled that the Commission has exclusive competence to adopt decisions on initiation of investigations and reviews as well as on application of anti-dumping measures. Dumping, material injury caused by such dumping as well as other grounds mandatory for application of anti-dumping measures (including adoption of decision under which anti-dumping measures shall not apply to particular companies) shall be established only by competent authorities and only in the course of anti-dumping investigation. Another crucial aspect, particularly important for foreign companies, is that the conclusions of the Commission made in respect of a holding company shall not apply to related companies because under the effective legislation anti-dumping duty rate shall be established individually for each producer and exporter. Additionally, for substantiating their positions, the courts directly referred not only to WTO Agreements, but also quoted WTO jurisprudence. The above may be treated as indirect confirmation that the courts are ready to take into consideration thereof.

Notably, on 7 May 2015, Russia requested consultations with Ukraine regarding anti-dumping measures imposed by Ukraine on imports of ammonium nitrate originating from Russia (DS493). The said case is at the stage of consultations. It goes without saying that the decision of the Panel (if any) on the present case can shed light on the mere possibility to apply any cost adjustments.

On 30 October 2013 Japan initiated WTO dispute settlement proceedings over the definitive safeguard measures imposed by Ukraine on imports of certain passenger cars. On 26 June 2015 the Panel issued a report in the said case.

According to the report, the Panel found that Ukraine had violated Article XIX:1(a) of GATT 1994 and Articles 2.1, 4.2(a)-(c), 8.1, 12.1-12.3 of the Agreement on Safeguards because the Commission applied safeguard measures in the absence of (a) unforeseen developments; (b) the recent, sudden, sharp and significant increase in imports; (c) serious injury; (d) a causal link. Moreover, Ukraine failed to (i) publish promptly a detailed analysis of the case under investigation and a demonstration of the relevance of the factors examined; (ii) notify the WTO Committee on Safeguards immediately after initiating a safeguard investigation and immediately after making a finding of serious injury or threat thereof caused by increased imports; (iii) provide Japan with adequate opportunity for prior consultations with a view to reviewing all pertinent information.

Ukraine has not even tried to appeal the said findings of the Panel before the Appellate Body of the WTO. Instead, on 10 September 2015 the Commission adopted a decision on terminating the safeguard measures on imports of passenger cars that came into force on 30 September 2015.

We believe that the Commission and the Ministry of Economic Development and Trade of Ukraine (i.e. the state agency responsible for conducting trade defense proceedings in Ukraine) will draw the relevant conclusions from the said case and will further apply safeguard measures only in the WTO compliant manner.

In June 2014 the Commission initiated interim review of anti-dumping measures on imports of float-glass originated in Belarus, Russian Federation and Poland, though the measures were initially applied also against float-glass imports from Turkey and Bulgaria. On 10 September 2015 the Commission terminated the interim review procedure and issued four separate decisions in a row on the same date terminating anti-dumping measures applied to imports into Ukraine of float glass originating in Bulgaria, Poland, Belarus and Turkey respectively. The Commission recoursed to the national interests argument as a decision making point, since domestic producers halted production of float-glass. What is important to know about this decision?

This is the first time in Ukraine’s practice to terminate active anti-dumping duties against countries that were not subject to the review procedure (i.e. Turkey and Bulgaria). Additionally, there are no separate regulations to review/terminate existing measures against countries that are not subject to the review. Of course, it is not likely that Turkey or Bulgaria will raise any concern in this respect, but other countries may do so. Secondly, such an approach from our perspective may encourage interested parties to participate in reviews more actively, trying to find additional evidence and change or review measures already applied.

As a result of hostilities in Eastern Ukraine, mid-cap size companies operating outside of the occupied territories became leaders in their industries. At the same time, the data shows their occasional involvement in the application of trade remedies. We believe that trade remedies can be quite an effective tool for industry protection and a starting point for market expansion for small and mid-cap size companies.