IT Regulation in Ukraine: Society Instead of Government 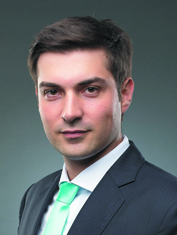 Juscutum Attorneys Association are the legal engineers who transformed legal services to meet all possible client needs. Our aim is to give a full solution to your problem and to adjust classic legal practices to modern needs. In 2011 we established a new practice for Ukraine, IT &Media. Now, in 2017, we are starting TMT practice, which united best professionals in Technology, Media and Telecommunications branch. We turned classical litigation practice into dispute management that focuses on solving your dispute using all available methods. White-collar crime practice has very strong expertise in business security matters.

We are bringing new technologies to legal services. Juscutum Legal Alarm is the first legal app in Ukraine that provides a new client-lawyer communication level. Now, the Patent bot is released in collaboration with our partners, to make trademark registration process easier.

Juscutum is a member of:

— World IT lawyers, global alliance of member firms, specializing in IT law.

Juscutum is ranked in TOP-50 Law Firms in Ukraine 2016 and in Intellectual Property according to Legal 500 2017 (EMEA). Represented in the Ukrainian Law Firms 2015, 2016: A Handbook for Foreign Clients. The firm is named in the TOP 5 of lawfirms in media, telecommunications and intellectual property law as well as in white collar crime according to internal rankings for 2015.

Juscutum also works as a legal representative of the Red Cross Society, participants of the Eurovision Song Contest and a number of Ukrainian museums, cinemas and theaters as a probono.

The firm’s attorneys have top-tier lawfirms experience and offer the same level of service at more reasonable prices.

IT is well on the way to becoming Ukraine’s national idea. The prestige of the IT profession and the number of IT educational volunteer projects indicate that the country is definitely going to strengthen its presence on the world map of IT professionals. The public is committed to making up for the brain drain through the extensive training of IT specialists. Not a month goes by that yet another Ukrainian startup or company producing an off the shelf product does not announce the raising of investment or winning of a tender. This news spreads across the country. IT has become the social lift against all the current negatives in the Ukrainian economy. With that in mind, the smartest and the brainiest are all out for IT.

While the IT industry is rapidly developing, on the contrary, the efforts made by the state are still in their infancy. Politicians mention IT in their speeches, have meetings with IT companies management; still, these important undertakings have not evolved into regulations intended to encourage business development. The most substantial help from state authorities lies in as little interference as possible.

In 2011-2012, a number acts were passed by the Ukrainian Parliament in support of the IT industry originally intended to introduce tax concessions for IT companies. Due to the specific features of the political process, the law that was actually introduced hardly matched the initial version and never caused any excitement among IT companies. Changes in tax legislation adopted in 2013 and 2014 weren’t actually the sought tax reform. However, they repealed all tax concessions, including those granted to IT. The key factor that makes Ukraine exceptionally attractive for the IT industry is the status of the self-employed and the applicable simplified tax regime. This has nothing to do with the special tax regime for IT companies. The issue is that the general tax terms for hiring self-employed contractors are favorable and allow the hiring of programmers and paying for their services with the general tax burden a little more than 5%. All the above, coupled with the quality of training and the quantity of professionals, is huge motivation for offshore programming development and outsourcing. There are companies in Ukraine currently hiring more than 5,000 programmers.

However, Ukraine still lacks incentive mechanisms for product development companies and R&D centers, although these issues are discussed almost permanently in Parliament.

Financial market restrictions imposed in 2014 intended to prevent economic shrinkages have not yet given visible feedback. However, they are reportedly regarded as the key factor of the economic collapse. In Ukraine, favorable conditions for payment systems are not established, which is a deterrent for e-commerce development. Rigid rules of e-money issuance introduced by state authorities and foreign currency obstacles stand in the way of the majority of payment systems commonly used within the world’s online trade system. In addition, the National Bank is cracking down on currency outflow and imposing excessively high rates for the mandatory sale of revenue in the form of foreign currency. On the one hand, these measures support the national currency; on the other hand, they turn the country into a kind of UAH reservation from the world market perspective. At the same time, there are private volunteer initiatives intended to attract global IT companies into Ukraine. The most active one is negotiations with PayPal held by Ilya Kenningstein. The authorities are not determined to play the leading part in this process. Representatives of the National Bank meet with volunteers, listen to them and give consent to their initiatives. Then volunteers go to PayPal headquarters to carry on the negotiations. Financially independent entrepreneurs and community leaders represent Ukraine on the international business arena.

Similarly, only private initiatives help to push forward such ideas as blockchain and use of open code software. Big companies render their best practices to state authorities with the aim of assisting in capacity building of the next-generation management system. A good example is the decision pushed forward by Dmytro Dubilet and Privatbank to render such open code systems to the state authorities. Widely known is the case of Ivan Yani, who helped to develop open registries and launched public information analysis electronic systems. Another example is Prozorro, an online procurement system developed by volunteers. Our company provided pro-bono legal support to this project. BankID and public e-services initiatives are also coming from enthusiasts at the moment. The state authorities decided not to take the lead in this process. They just pick proposals among those suggested and dryly express their gratitude. This explains the situation when IT initiatives are dotted across the country. Lately, Lvоv has become the center for innovations. Local authorities attract volunteers and demonstrate their openness towards innovation. Volunteers together with state officials who came to politics from business, are actively lobbying the idea of e-government implementation at the highest national level. Still, representatives of the bureaucratic machine express their disapproval with restraint.

The decline in public contracts awarded to IT companies undermined the system integration market. Integrators who failed to break into the international market or firmly establish their positions within the private sector took the big heat. In fact, the system integration market is currently reloading. It is worth noting, however, that once again, the state authorities expect the public to perform as a regulator. Private companies modify outdated standards at their own initiative and hand them over to the state authorities.

Reform of law-enforcement is moving all too slow. At first, it did not sound meaningful enough, but the delay in implementing reform is actually a serious driver hindering business development and, in particular causing major problems within the IT sector. The thing is, corrupt law-enforcers used the searches to actually terrorize business. IT companies turn out to be extremely vulnerable, because seizures of computers during searches resulted in business activities grinding to a complete halt. Reform of law-enforcement has already resulted in the establishment of the national police patrol force. Yet, patrol officers have nothing to do with searches in IT companies; they are actually carried out by investigating detectives. However, in late 2015, Draft Act No.3719 was registered which sets out a number of measures to prevent unlawful searches. Most notably, there is a provision stipulating that in case investigators are interested in any piece of information they should copy it from computers instead of seizing the equipment. It is worth mentioning that state authorities welcomed this initiative. Our company, acting as an independent law firm, developed the said law draft. We never received any orders and nor were we involved in any lobbying. Many politicians spoke in favor of our legislative draft. With that in mind, we believe it is quite likely that the problem will be resolved as early as this year.

Talking about the IT sector’s development, we cannot help to mention The Special 301 Report and copyright abuse that has, unfortunately, made Ukraine infamous around the globe. However, the root of the problem is not copyright infringements. Rather, the issue is about communication problems. Ukraine somehow does not seek to demonstrate its modest progress in procuring licensed software and computers with pre-installed software, whereby a few years ago tough statements were made against Ukraine regarding the use of counterfeit software by the state authorities. Team management setup and the problem of Internet piracy are still under discussion as legislative proposals. All the said problems actually exist, but neither their scale nor status allow us either to claim the situation has actually reached its critical point or nominate Ukraine as the No.1 copyright violator in the world. Rather, it looks like the state seeks to be awarded the title of the most passive one in dealing with the said issues.

So far, the one and only actual effort to combat Internet piracy cannot but raise hackles. The new Draft No.3081 On Copyright Protection was passed in the first reading. However, no one actually expects its implementation to be efficient. The said legislative Draft fully ignores the preliminary work of associations and advisory teams. It has been obviously pushed through via lobbying and written in a hurry. Taking into account the low rate of Internet expansion and the size of the market, Ukraine cannot be regarded as the world’s leading Internet copyright infringer. Here there are no sites with traffic even compared to that of The Pirate Bay or Mega (the successor of the famous Megaupload). To resolve the problem of counterfeit content distribution, it is necessary to make legal content available. Otherwise, the anti-piracy campaign will instead become an anti-Internet one. The main factor preventing the development of legal services is the lack of customer purchasing power. As a result, this vicious circle confines the successful running of businesses.

However, the lucky ones who break this circle will definitely prosper. In this sector, there are local players who will develop in line with economic growth.

All in all, while our authorities mostly speak about IT, Ukrainians are actively developing it. What we need right now in order to fuel development of IT is for the nice words of politicians to, at least in part, be embodied in legislation.